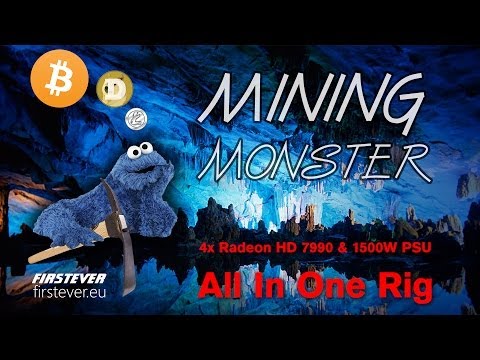 I've been mining on my 6850 for a few months and I've decided that it's pathetic. I understand that "when ASICs arrive" it will change the entire mining ecosystem, but given the perpetual delays in shipping (at least from Butterfly Labs), I want to build my own GPU powered miner. I have about $4k USD to put into a system (or multiple systems if that's a better idea) and I'd like it to hit at least 3.5 Gigahash/s. So here's my questions:
1) To keep the machine viable as long as possible, it needs to be power efficient. The numbers I've seen on the new 7990 put it at about 1.2 Ghash for 375 watts of consumption (https://en.bitcoin.it/wiki/Mining_hardware_comparison and http://www.tomshardware.com/reviews/radeon-hd-7990-review-benchmark,3486.html) - 3.2 Mhash/watt. Would I see better efficiency numbers from a different card?
2) I understand that mining does not require the card to be in a full speed PCIe slot to get optimal hashing power. If I use a 7990, is the fact that it is a Dual-GPU card going to require more than a 1x PCIe slot? Or, more specifically, how much bandwidth does hashing require per Mhash/s? The answer to that question leads to the last question -
3) If I build a setup with a backplane for additional PCIe slots, how many slots could I realistically add before Windows 7 Ultimate x64 fails to recognize the devices or otherwise derps out? I'm not against setting up with a Linux based system, I just haven't seen appropriate drivers available on that platform. (Side note - do I NEED Catalyst drivers to run an OpenCL miner?)
Any advice or information on suggested builds would be appreciated, and I'll tip helpful people. Thanks!

So I just recently upgraded my old bitcoin miner into a gaming PC. It used to have a really crappy CPU so I replaced it with something a bit more up to date. After I got it all up and running I tried to play GTA V and it worked really well at first, looks great, plays smoothly, the only problem is that after playing for awhile my computer will randomly go black and freeze and the only way to do anything is to do a hard reset.
I also noticed that when I tried to overclock it I could never really get a stable clock. And then when I tried to use the automatic OC tool on my mobo, it literally fried my PSU. It was a Corsair RM850, I had to RMA it but I ordered a new PSU to replace it while I wait, and this one is only a 750w. I got it to power my build but I am still getting the same freezing that I was on the old PSU. I'm not sure if its a problem with the power supply or not because when it does freeze the fans and everything are still on and spinning really fast.
It could possibly be a problem with overheating but I have 3 fans on my 7990, aftermarket cooling on my CPU, and 3 case fans, and the side panel is off (but it's still right next to a wall). I'm also not overclocking it at all. The case might not have the best airflow in the world but it doesn't seem like it would be that restricted.
Basically what I am wondering is can an 850w power supply normally power a computer with these specs and also remain stable while overclocked?


Obviously it can power it while not at max capacity, but whenever it is being pushed to the limit it seems like it fails on me. I'm wondering if it is necessary or not to upgrade to a 1000w+ PSU or if this problem is probably being caused by something else like overheating?
Thanks in advance for any help!
tl;dr is a 850w power supply big enough to handle this build when fully overclocked?

Per the title, I want to put together something for a variety of purposes, and be able to add on as time goes on.
Uses for the machine:
The 6990 is just a pricewise placeholder: I'm waiting for the 7990. If they're hard to come by, I'll probably start hunting for a second one soon after building the rig. Although, since I don't need Crossfire for mining with multiple cards, I suppose I don't need to have matching cards.
The three 1TB drives are for a RAID 5. I currently have a slow 2TB drive that I'm going to use for weekly backups. I may add an SSD just for those really fast boot times.
I was going to go for three monitors (the (6/7)990 can drive four, yes?) but I don't think I have the desk space. Maybe someday, just to feel like I'm commanding a starship.
Any and all criticisms, suggestions, and substitutions are welcome.
 Part list permalink / Part price breakdown by merchant / Benchmarks